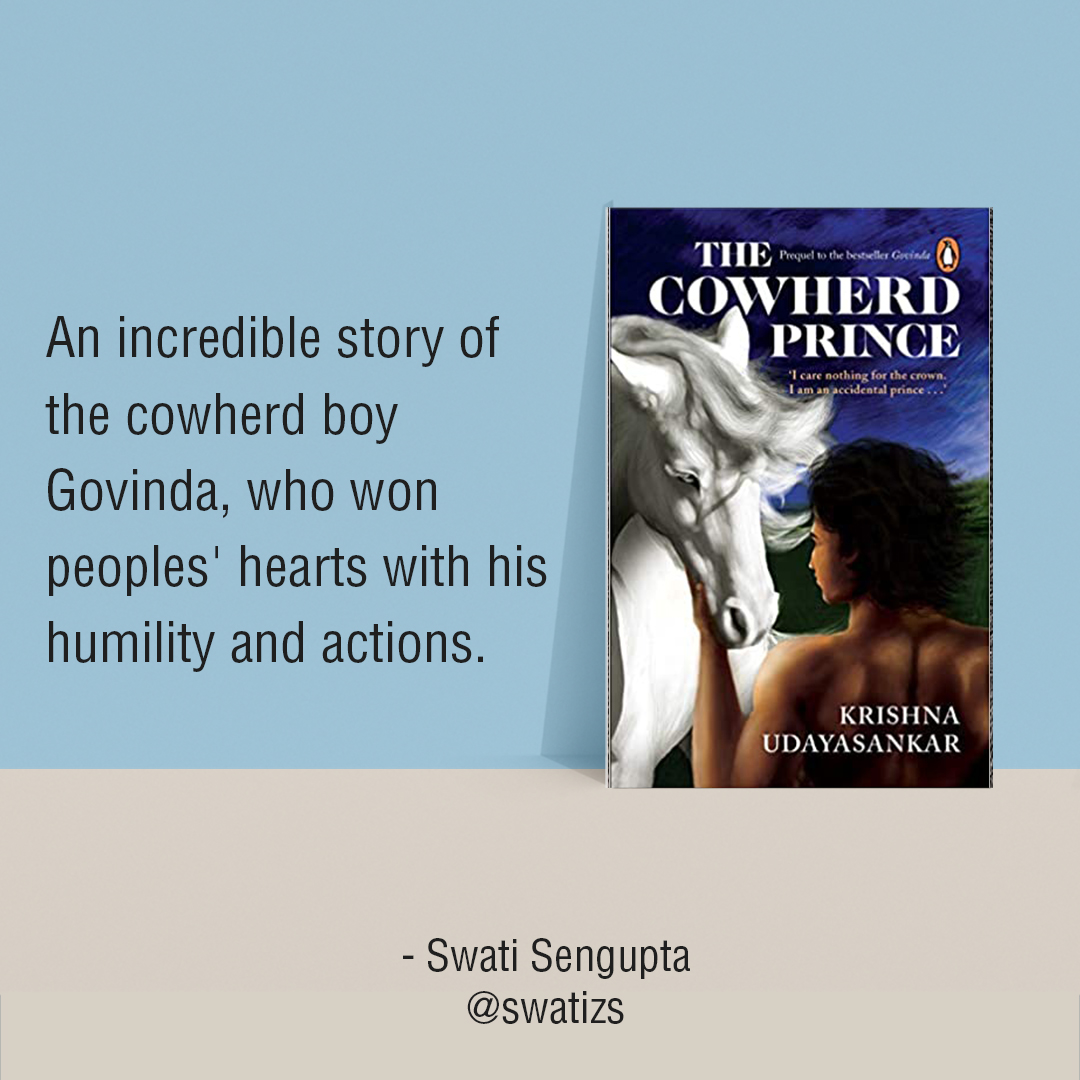 I finished reading “The Cowherd Prince” a few hours back and I am still intoxicated with all the emotions I felt reading it. First, let me confess, the Mythology genre isn’t my cup of tea. I read Ramayan, Mahabharat, and other epics from around the world during my teenhood, true. But mostly for the sake of reading classics. I couldn’t imagine myself choosing a book on Mythology spontaneously after that. To me, this genre meant nothing but egoist adults, kings waging war against each other and torturing their subjects until I read this book. This book cured my mental block.

Govinda, the son of Chief Nanda, was a simple gwala boy living a simple life in his Vraja of Surasena in Aryavarta with his friend Balabadra by his side until one day the soldiers came for him. Eventually, it was revealed that he was a Vrishni prince, the rightful heir of the Surasena crown, and Balabadra was his half brother. To save Govinda from his uncle, the tyrant king Kans, his biological father Prince Shura of Vrishni took him to Chief Nanda secretly and swapped him with Nanda’s newborn daughter. No one knows what happened to her.

We all know Govinda killed his uncle Kans and liberated Surasena from his clutch. But little did we know about the bloodthirsty Chanuran’s cruelty that brought mayhem in Surasena and how his secret plan led the land to more destruction and hardship. It is also not common knowledge that King Jarasandha, father-in-law of Kans held so much power over the fate of Surasena. The book tells us how Govinda, the gwala boy, stood up against all of them and became a man worthy to be a prince, a future king within a few days. The Prince, who didn’t come to rule but to lead the Jaghanyaja, the people, to prosperity, to hope.

What I liked about the book

Everything! The narration, the flow of the story with twists and turns, the thriller factors – everything. Every time I thought this was the climax and now everyone lives happily ever after, a new thrilling chapter begins. I also want to mention the dialogues, conversations, and the wisdom behind them. They are worth reading and pondering over. I can’t resist quoting some of the dialogues or wise words from Govinda.

Govinda to Yuyudhana: “You mean, because you think Kans’s chances of victory are higher, you refuse to stand against him, which in turn makes it all the more likely that he will win. A self-fulfilling prophecy, no?”

Govinda to Balabadra: “I do not claim to be able to change the world. But I have no one else to blame if I do not try.”

How a cowherd boy changed the mind of the people, who doubted his abilities, with his humility and actions is something to learn from.  This book sure is a hard work of the author, Krishna Udayasankar based on thorough research of the epic Mahabharata and other folklores over the years.

Would I recommend this book?

Yes, yes, and yes. Go read it fast. Because three more sequels from “The Aryavarta Chronicles” are waiting to be read.