Book Review : The Devil And The Dark Water 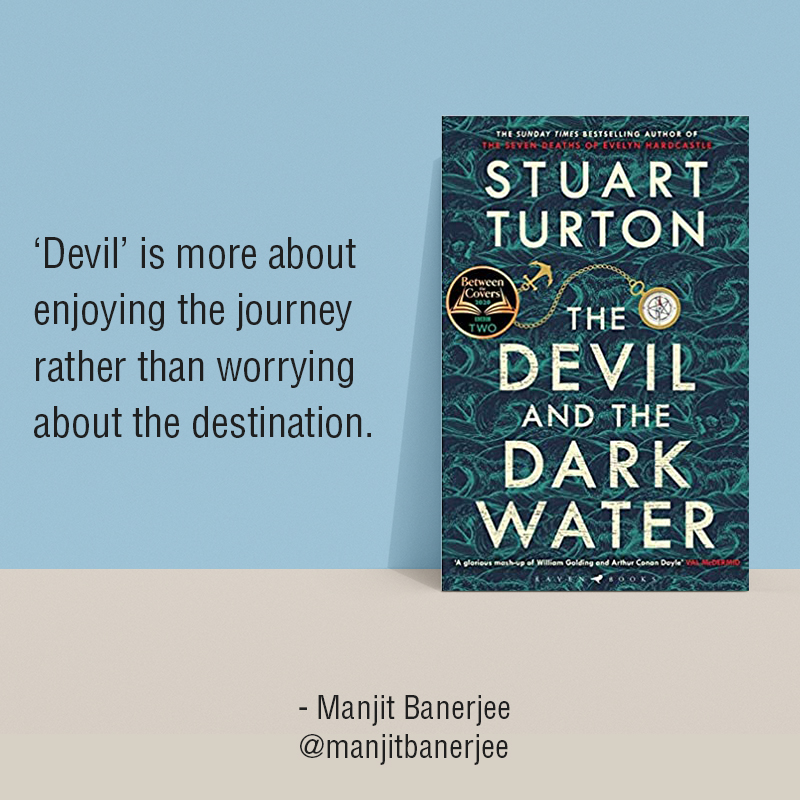 Stuart Turton’s ‘The Devil and the Dark Water‘ starts loud, in the strict sense of the term – a prisoner, protected by a huge man, being pulled out of the town’s main gate, people hurling stones and curses towards him, one can visually imagine the cacophony. It appears there is a ship waiting on the shores for her passengers, and the prisoner and his protector is also on the list. The land is introduced as Batavia, and the destination of the sojourn is given to us as Amsterdam, loaded with spices and fortunes, some to be made. Amidst this grandeur noise, a leper shows up atop barrels waiting to be uploaded on the vessel, professes the ship is ‘damned’ and all boarding it finally would perish and almost in an instant he catches fire, falls to the ground in extreme pain and agony, only saved for a while by a cask of ale, showered upon his suffering by the huge man, being introduced as ‘Arent’. Turton’s choice of names has been intriguing, ‘Aiden’ being the last one from ‘The Seven Deaths of Evelyn Hardcastle’, ‘Arent’ is an interesting name, especially for his English audience. We get introduced to Governor General Jan Haan, his wife Sara Wessel, her daughter Lia and the prisoner Samuel Pipps (aka Sammy). The novel ‘sails’ from here on – you sail along with murder, jewels, harp, sailors, governor, mercenaries,  captain, musketeers, lepers, fist fight, barrels of spices, exquisite dress, immaculate mannerisms, love, hate, history, grudges, fortunes, bankruptcies, gun rooms, healers, witches, devil, mark/symbols, rolling from the mainmast to the mitten-mast hitting the aft and the hull at times, galloping from one deck to the other, gaping at the opulence of grand cabins in one instant and tearing at the misery of passengers on hem hammock in another.

It is an interesting tale, set on an ‘Indiaman’ ship (called ‘Saardam’), headed for Amsterdam, high treasures and secrets at her belly, with the high rank official and rich guests aboard, with unanticipated events including gory murders, vanishing ally-ships, sailors bellies full of rumours and superstitions and suspected devilry at work. Pretty similar to ‘The Seven Deaths of Evelyn Harcastle’, holistically ‘Devil’ is more about enjoying the journey rather than worrying about the destination. Most part of the novel sticks to the main plot, sub-plots exists but do not take one off track, sticks to the “main-mast” of the story. Although there are multitude of officers, guards, captains, passengers, sailors, musketeers, Turton’s tale is woven around a handful of “named” ones, which I think is a marvelous take given too many “named” characters with a conservative “ye olde” twisted mystery plot might end up taking off the reader’s attention. The plot is essentially ‘old school’ Chrstie’s or Doyle’s murder mystery, with mystical elements of devils, witchcrafts, treason and treasure added on.

I was rather cheerless (‘disappointed’ would be a notch higher, hence not such) with the wrap-up of the novel, but having said that, I could fathom there could not be a better end if one has to tie all the loose end of the plot, so this had to be it. Or, to put it another way, I was probably expecting more clues to wrap the ending slightly prior to almost ninety-percent of the novel. Nevertheless, I realised it to be more than Turton’s signature style than an aberration. The novel is recommended for the ‘genre’ of patient reader that enjoys the sentences, appreciates the words (most of them are Middle English) and prefers a meticulous fleshing out of the plot with 17th century set-up, but not strictly a historical novel.