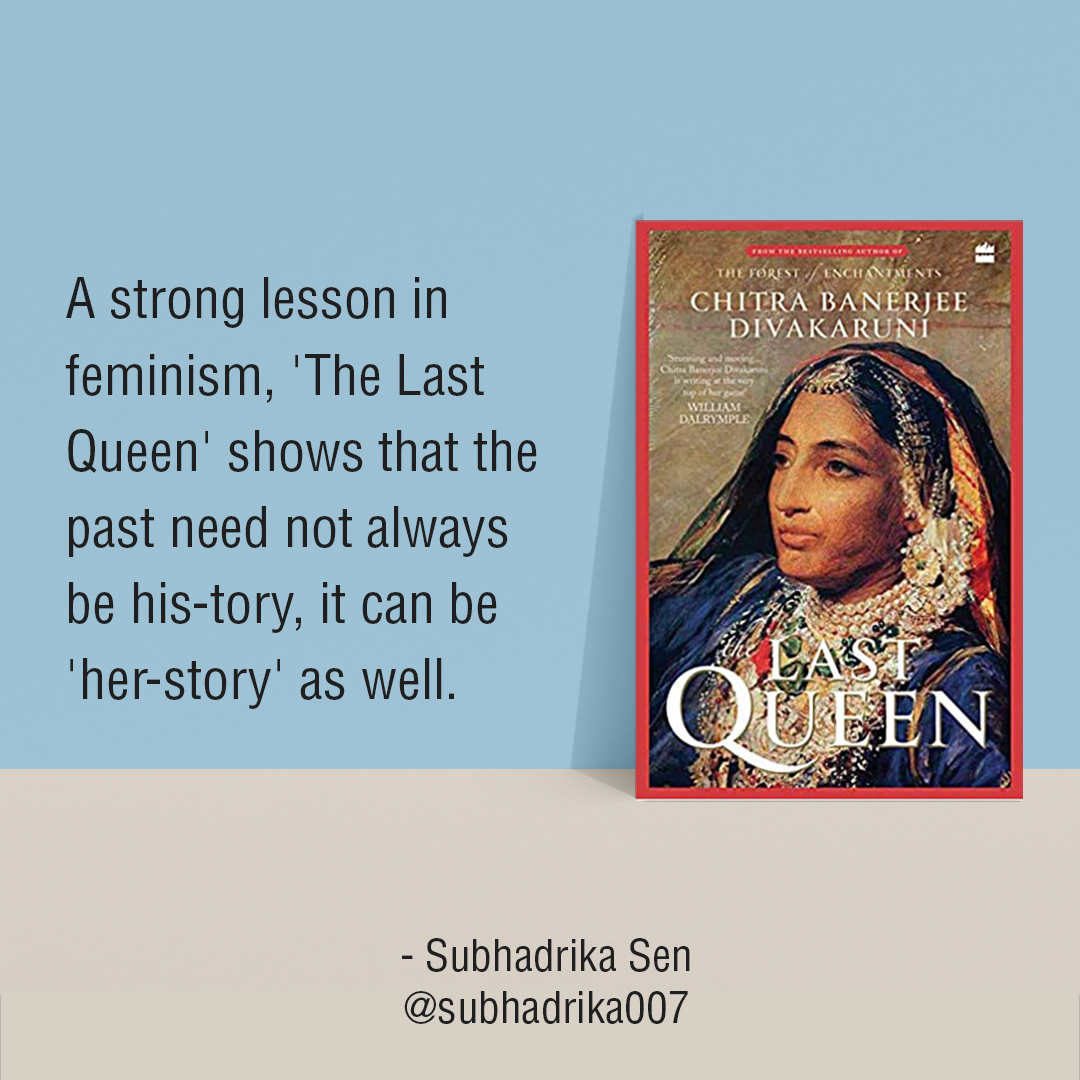 ‘I remember the little girl from a long time ago, who told the Sarkar that it saddened her to think of Sikh Soldiers dying, their faces towards their homes. How far I’ve travelled from her!’

Chitra Banerjee Divakaruni’s latest book The Last Queen opens the pages of a lesser known chapter from the history of Hindusthan. Rani Jindan, the last queen of Maharaja Ranjit Singh is a personification of innocence transformed into courage, hope, patriotism, nationalism, love and duty.

Being the daughter of a royal dog-trainer her life is marred with poverty and ostracism from the very beginning shrouded by gender bias. But her life takes a complete turn when Maharaja Ranjit Singh marries her and takes her away to live with him in the Fort. An unspoken cold war of might, ego and superiority complex follows at the Zenana and yet she fights against all, making friends and winning the hearts of many. As the years progress, the Rani turns into a young mother, a widowed wife, the Royal Regent and the Mother of Khalsa , surprising everyone who ever mocked her of her lowly birth. When the East India Company finally overpowers Punjab and Lahore, she is forced to face a cruel exile without Dalip. This only sours her attitude towards the British and increases her yearning to meet her son. Hurt could be clearly seen in her actions and words when she tries very hard to win back her son, the son of Maharaja Ranjit Singh, but is always greeted by a British instead.

Rani Jindan’s personality shines throughout the novel. Her greatest strength are her relationships- her relation with her family, the bonding she shares with her older brother, her love for her husband Maharaja Ranjit Singh and son Dalip , her care for the Khalsa army and even her attendants. Her life is subjected to many ups and downs and has shades of various emotions. But what is most striking is her loneliness which she is always adept in hiding through her duties, charity and by reminiscing memories.

The Last Queen raises many pertinent questions and observations about the trajectory of history of Hindusthan, the prominent of them all being the facts and resources about the Queen and where it gets lost in modern history timelines. She brings backs to life an important part of Indian history which was gathering dust as scattered literature for the past decades. This chapter also highlights how the motto of India which is – Unity in Diversity- has been repeatedly used against the people of this country to divide and rule them. Further, when one talks about Maharaja Ranjit Singh it is impossible not to make a mention of the Koh-i-noor, the diamond that changes the relationships between the two countries forever.

The Last Queen is a lesson in feminism, to stand up for ones rights and fight till the end to retain them. It also emphasizes that the past is not always ‘his-tory’ it is equally ‘her-story’ and these voices and contributions should not be overshadowed by any means. Like all Divakaruni’s books she has held interest, brought out facts, as well as fictionalized the sequences to make it a memorable read for the audience. Female personas and psyches have always been the prime part of Divakaruni’s writing be it mythology or fiction and she has taken immense care to keep up the interest of her readers with her latest book.